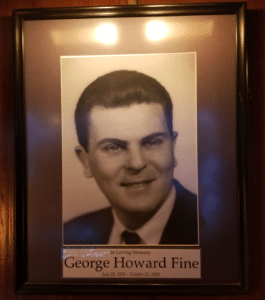 One of the strange things you learn as you grow older is the fact that many of the great experiences you have in life don’t seem special at the time they happen. It often takes years to realize how an event was unique and special – and then you begin to appreciate how fortunate you were to have had such an experience.  This certainly happens with me, and I now realize how so many of the experiences I had with my father and mother growing up were incredibly special, when at the time they seemed, well… normal.

When I was young, center city Charlotte was vastly different than it is now.  For our family, a trip downtown meant something special – a trip to Sears, Belks or, for REALLY important celebrations a visit to the House of Steaks.  As a young boy who truly loved steak, I guess it is fair to say that I did, at the time, realize how special it was to eat there.  This was The Club, the building where my father used to operate the Flamingo Club.  It was the Flamingo Club that brought my mother to Charlotte as a young nightclub singer, where she met my father. And the typical evening in the House of Steaks, the building that formerly housed the Flamingo Club, was filled with daddy telling stories of operating The Club, of bootlegging liquor and watching momma sing in the club.  If there was live music (and there often was), it was not uncommon for momma to start singing along with the musicians at some point during the meal.

But this story isn’t about them.  After closing The Club, Daddy had leased the building to a young restauranteur named George Fine, who opened the House of Steaks.  Mr. Fine took great pride in running a first class restaurant, and The House of Steaks was that in every way.  I always looked forward to seeing him when we visited the House of Steaks – he would sit in the booth beside me, facing my father and mother, and share his own stories.  More importantly to me (at least at the time!) was the fact that Mr. Fine would fix my baked potato.  I remember watching in fascination each time as he carefully went about the task, and although he never wavered in his attention to the conversation, he meticulously prepared my potato until it was a treat in itself, the ideal companion to my perfectly cooked medium-rare steak.

Mr. Fine began by rolling the potato on the table, still wrapped in the aluminum foil.  This softened up the inside of the potato, making the next steps easier to accomplish without causing the potato to cool down.  He then sliced through the potato, aluminum foil and all, and each time he would stop the conversation to tell me “Now when you do this, always make sure you don’t get any aluminum foil in your potato.”  He then kneaded the potato from the ends, opening up the slit he had just made.  Butter was served at the House of Steaks in unwrapped pads on a small plate – and he would place two pads right on top of the steaming potato.  A third pad went onto the extremely hot steak platter, beside the sizzling steak.  Turning back to the potato, he methodically sprinkled it with salt and pepper – and he used a LOT of pepper.  The white of the potato would almost be covered with the pepper.  He then took my fork and mixed everything up, making sure to get every bit of the potato mixed in with the now melted butter, salt and pepper.  He then topped off this masterpiece with a huge dollop of sour cream and slid it closer to me.  By now I had cut my steak, and soaked the first piece in that melted butter on the platter. The first bite of that potato – perfectly seasoned and buttery, still steaming hot, with a bit of that cool sour cream, all on top of that first piece of steak – was absolute heaven.

My family’s world was turned upside down with the sudden death of my father in 1977 from an aneurysm.  At that exact time, the City of Charlotte condemned the House of Steaks property in order to build Discovery Place – and so another Charlotte landmark fell to the wrecking ball.  But in this particular instance, part of the story survived.

George Fine cemented his place in history as a Charlotte restaurant legend – he opened another steak restaurant at 4538 South Boulevard, known as the Beef N Bottle.  By that time, I was not only able to fix my own baked potato, I could actually drive my own car to see Mr. Fine – and I often did.  He would still sit with me in the booth, and we would share stories of my father.  I have many more stories of those days as well.  Mr. Fine died in 2009, and left the Beef N Bottle to Ron Rice and Rick Bouman, with the understanding that they would carry on his legacy.  And they have.  Rick often greets you as you enter the door of the Beef N Bottle.  I saw him on a recent visit to the Beef N Bottle, and just like Mr. Fine before him he took time to talk to me and share some stories.  The steaks are every bit as good as they used to be, and while Mr. Fine isn’t there to fix my baked potato anymore, that’s okay.  I learned enough from watching him that EVERYONE now asks me to fix their baked potato for them.  I put the same effort and attention to detail into it as he did. My time spent with a Charlotte Restaurant Legend was indeed special.