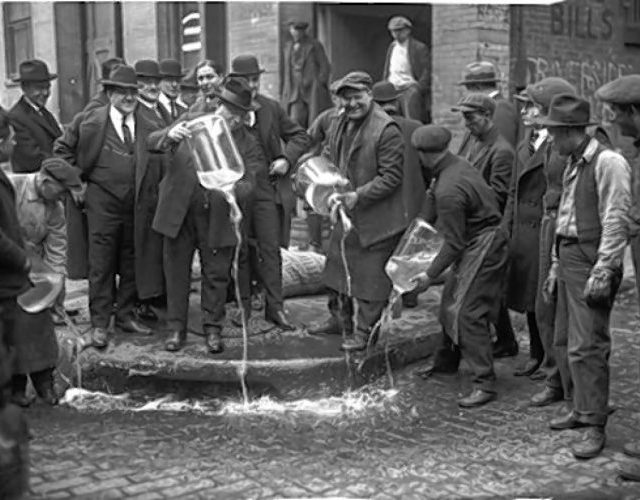 If you haven’t noticed, there is a definite trend towards Prohibition era cocktails and even theming modern day bars and restaurants along the lines of a Speakeasy – the term used to describe underground or otherwise secret businesses where you could buy a drink of liquor when it was patently illegal to do so.

Most people know that Prohibition was enacted across the entire United States during the Roaring 20’s.  The result of the 18th amendment to the Constitution of the United States, it went into effect on January 17, 1920.  The intended purpose was to combat the evils of alcohol consumption, but instead it simply drove those who chose to drink underground – in some cases literally!  The country gradually reversed itself through popular opinion, and the law was repealed on December 5, 1933 when the 21st Amendment to the Constitution was ratified (by Utah, the 36th state to do so, over the staunch protests of The Church of Jesus Christ of Latter-day Saints).  The 21st Amendment repealed the 18th Amendment, effectively ending Prohibition.

So, by the standard accepted timeline, Prohibition lasted 13 years.  But what a lot of people don’t know is that in North Carolina, and particularly Mecklenburg County, it lasted MUCH longer.  North Carolina passed a ban on alcohol consumption known as the Turlington Act that went into effect on January 1, 1909 – a full 10 years before the 18th Amendment was ratified.  And even though the grand experiment of Prohibition was pretty much accepted as a failure, that did not deter the people of North Carolina from continuing the ban on drinking.  Only two states failed to ratify the 21st Amendment repealing Prohibition – North and South Carolina.

It would be another two years before North Carolina allowed the sale of alcohol in a limited manner – and then only in certain counties by local option.  In 1935 the State legislature passed several Acts which allows Pasquotank, New Hanover and a few other counties to hold a local referendum to allow the sale of alcoholic beverages.  The first store to legally sell alcoholic since 1909 opened on July 2, 1935 in Wilson, North Carolina.

The matter was not settled by any means.  A Governors Commission initiated a study with the objective of making a recommendation regarding state-wide alcohol sales.  That commission determined that the best option would be to establish a state monopoly on liquor sales – thus guaranteeing control AND a steady source of revenue.  The North Carolina State Board of Control – later known as the Alcoholic Beverage Control Commission – was formed in 1937, essentially establishing the system regulating sales of alcohol in North Carolina that we know today.

But the story for Mecklenburg County did not stop there.  It was not until 1947 that the Mecklenburg County ABC System was formed, finally bringing the legal sale of alcohol to the residents of Charlotte.  At that time, our father Frank Ratcliffe essentially closed down his efforts to supply the residents of Charlotte with “tax paid liquor”, brought in from other states where it was legal to purchase.  Henry Severs, a good friend of Frank, became the Chief Law Enforcement officer of the Mecklenburg ABC, and the system prospered and has grown into the largest ABC Board in North Carolina.

And now you know the answer to the question posed in the title of this post. Although most people will say “13 years” when asked how long Prohibition lasted, you can politely inform them that, at least in Mecklenburg County, it lasted a LOT longer – 38 years in fact.  Unless you happened to have known a gentleman by the name of Frank Ratcliffe…