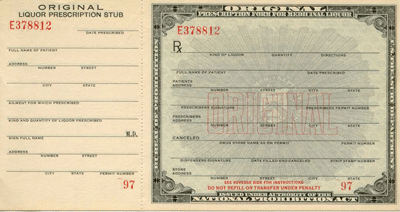 One of the “loopholes” in the Volstead Act (which is the legislation that enacted Prohibition) was the provision that certain alcoholic beverages could be prescribed for medical conditions.  Thus, your friendly doctor could write a prescription for a pint of whiskey (on the official government prescription form), which you could take to your friendly neighborhood pharmacist.  The local drug store was a popular place, and the HOT TODDY was a popular form of medicine – used to treat everything from the common cold to flu to general aches and pains.

These prescriptions were quite popular, with at least one major drug store chain enjoying rapid growth during prohibition.  Walgreens went from 20 stores in 1919 to about 525 by 1929.  Admittedly, the management of Walgreens attributes this to factors other than dispensing prescriptions for liquor, such as great management and another beverage’s popularity (milkshakes).  Those must have been some REALLY good milkshakes.

Fortunately, although we complain from time to time about restrictions on the sale of liquor (especially in some of the control states) things aren’t as bad as they used to be!  If you would like to see a list of ABC Boards that carry our Seven Jars Distillery products here in North Carolina, VISIT OUR WHERE TO BUY PAGE where you can find an easy-to-use map that will help you out!